My teenage years were quite a lonely time for me. I’m sure I’m not alone in this. I soon got used to sitting in the SEN* room during breaktimes because it was easier than being alone in a crowd of friendship groups. One or two people made the effort to talk to me, and I appreciated it, but mostly I had to put up with other people talking about social events I wasn’t invited to.

If you’re not reading this while listening to some sad violin music, then you should be.

This is one of many struggles for young people on the autistic spectrum. Despite the “unemotional” stereotype, many of us are weighed down by the need for intimacy but difficulty in connecting. Since secondary school, things have improved significantly for me, give or take a few bumps along the way, but when non-verbal language isn’t your forte, sometimes it’s as if people forget you exist.

But while the stereotype that we don’t care about people is usually untrue, it is true that people with Asperger’s can find social events overwhelming. I was reflecting on this recently; I love feeling like I belong, and that people want to spend time with me. Sometimes, however, I get invited to social events where I don’t really know anyone properly, the activity is something I find hard, or I’m already feeling drained. Then if I say no, I inwardly scold myself for being ungrateful when social isolation used to be a real problem for me. If I get left out, I feel lonely. If people try to include me, I shy away in favour of being alone. Right?

The fact is, I always appreciate any attempts to help me feel included, even if I’m not front-and-centre at every social event. A bit like how a person in a wheelchair may want to be as involved as the next person, but might be reluctant to agree to go on a hike. Besides, I’ve been to a fair few events outside of my comfort zone, and actually ended up enjoying them – a few years ago, I wouldn’t be seen dead in a tent, for example! I just like to know that I’ll have at least one close friend I can stick with who understands autism, and opportunities for quiet time.

So if you’re not sure how someone on the spectrum feels about being invited to something, it doesn’t hurt to ask. They may say no, but if they’ve repeatedly felt left out in the past, they may still want to know that they were thought of.

Over the past few years, I have been very lucky. I have found better friends than I ever thought I would, and, more recently, have fallen on my feet at the church I now go to. Now, I could probably get through several blog posts by giving a shout out to everyone I’ve met since my uni years, but for now, I’m giving the spotlight to my friend Hester and her family.

I’ll start with a few key points. Firstly, I met Hess and her family through various Navigators* events and activities. I distinctly remember meeting Hester the first time I went to the Navs weekend away in Blackpool, but given that I spent the whole weekend hiding behind the only person I knew, I fully understand if she doesn’t remember this. While I was at uni, her parents took me under their wings, inviting me over, giving me lifts to places, and showing me endless kindness. And Hester herself, despite any emotional upheaval of her own, is one of my go-to friends and text recipients when life has taken a plunge. Panic attack on a trip abroad? My sister getting dangerously ill? She always has a listening ear and words of comfort. And a hug like no one else.

I’m pleased to say, I’m not the only person who appreciates this. Cue a brief introduction to James: fellow student Nav back in the day, medic-in-training, and a generally great guy. When Hess started coming to weekly Navs Bible study evenings, they bonded over a love of history, castles, and other brainy topics. I had my suspicions about how this would end up when I was waiting in town for Hester and she arrived under James’ arm. Last Saturday, my suspicions came true: they got married!

Given that history is her main forte, I was rather pleased with my suggestion that she should wear a suit of armour on the day, and a little disconcerted when she turned up in a wedding dress instead. I stand by my opinion that this is a highly original and creative idea of mine, but actually, it would have made disco dancing awkward, come to think of it.

In all seriousness, I’m honoured to have been so involved. I was invited to her hen party, and felt like a kid again. This may have been from playing games like pass the parcel and Blind Man’s Buff. It may have been from the sheer amount of cake I consumed. Or it may have been me shadowing her mum the whole time, relapsing into my childhood habit of staying close to the grown-ups when I could be mingling with the other children…

Finally, last weekend, I got to play my violin in the church band at her wedding! Having got back from holiday two days previously, and arranged to stay with different people the night before and after, I felt a bit like I was on tour. I also felt like my playing gave off the (correct) impression that I’d only been around for one rehearsal, and that I didn’t know at least two of the songs. But whatever my playing sounded like, I loved every minute of the day. In conclusion, I am proud to be friends with Hester and James, and have high hopes for their life ahead. To the bride and groom: a big, Hess-style bear hug from me!

At the hen party 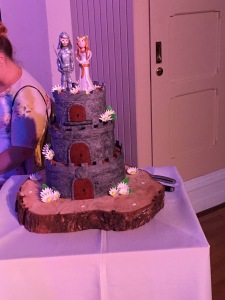 *A Christian mission organisation which included a student group in Leicester that I was involved in.