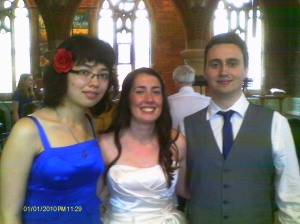 After spending at least a fortnight having nothing interesting to blog about, this weekend has been the stuff of legends. It’s not often that I allow my stepfather to help me fail at Ceilidh dancing (pronounced “kaylee” – no, I didn’t see the spelling coming either). And it was a once in a lifetime event for family and friends alike, but most of all for my dear stepbrother and stepsister-in-law, the newlyweds Mickey and Sarah.

Those of you who have been reading my blog since April will already know about Sarah. If you haven’t, she and I have been friends through letter writing, blog following, room sharing and, more recently, my visit to her student house in St Andrews. Thinking about it, her dating my stepbrother Mickey may also have been a contributing factor. She is also, next to my Grannie, my most loyal blog follower, as was shown by her reading and commenting on my last post even with the wedding day looming large.

My first memory of their relationship was of 12 year old me asking 15 year old Mickey to describe his new girlfriend, preferably without getting too sentimental about it, and him deliberately describing her as over-romantically as possible. Since then, other family members may have had a closer view of their relationship than I have. However, when pretty much everyone who gave a wedding speech recounted how Mickey is on the way to overcoming his fear of fruit and vegetables and how video games are no longer the main love of his life, I do know where they are coming from.

About a month before the wedding, my sister and I had the honour of attending Sarah’s hen party. It was an Alice in Wonderland themed tea party, complete with Alice in Wonderland themed garden ornaments and intricately decorated crockery with labels saying “drink/eat me”. Apparently there was a prize for the best decorated hat. Unsurprisingly my sunhat covered with foreign postage stamps, though showing my superior sense of originality, may have been put to shame by other guests’ mad hatter/wedding/flamingo themed handmade hats. The music was a combo of Disney, Taylor Swift and Carly Rae Jepsen, to name but a few, and I have a feeling this was Sarah’s way of saying a fond farewell to her favourite songs without Mickey there to intervene. All in all, a fantastic party.

The wedding, on Saturday 13th July, was a huge success. The order of service sheets were said to be indicators of everything that would be happening during the wedding, but we all knew their real purpose: to be used as fans to combat the hottest heat the UK has had so far. As I witnessed the ceremony and marital vows take place, I was struck by how quickly the past two and a half years had gone since their engagement. I also felt a renewed sense of respect for how far Mickey and Sarah had come in their relationship and their obvious love for each other.

The Ceilidh dance was part of the wedding reception, along with cake, a bouncy castle, cake, getting reacquainted with Sarah’s friends, cake, etc. Maybe it was the few sips of champagne I’d had, maybe the heat was affecting my brain – but I, with my two left feet and fear of looking like a fool, somehow ended up dancing the evening away. And enjoying it. And leaving the building more tired than I sometimes am after a gym workout.

One of my favourite parts of the reception was Sarah’s sister’s bridesmaid speech. It was witty, informative and gave Mickey clear instructions on how to live with Sarah. So, to conclude, I would just like to wish Mickey the best of luck in finding ways to distract Sarah from things that over excite her, other than by playing dead or pretending there’s a fire. I also sincerely hope that Sarah is successful in preventing Mickey from naming their future children “Captain”, “Damaj” or “Danja” – I’ve told her she can go into hiding in my room until the birth certificates are signed. Mostly I would just like to echo what has already been wished a thousand times: a long and happy future together. All my love to you both.

I have spent the past couple of weeks not having anything interesting, dramatic or even vaguely entertaining happen to me. Which I suppose is all very well, but it does mean I have been in a state of internal conflict. This has meant wondering whether my next post should be about exploring faith, knowing who your friends are or how conversation can go from ethical issues to cake in just one sentence. It is an internal conflict which is currently being resolved, by me realising that the perfect compromise would be to write about one topic for which recognition is long overdue: cell group.

When I was first invited last year I don’t think I really knew what to expect. Now, looking back, I realise that there have been few other social settings in which I have landed on my feet so easily. I’m really not one of life’s socialites, and until recent years, had spent any people based settings keeping a low profile and not knowing the first thing about fitting in. Since meeting friends from Thorpe Acre church I have learnt a lot: how to give and accept hugs without shrinking back; that passing the time by singing your own interpretations of worship songs is perfectly acceptable; that not everybody judges you by your social skills or sense of fashion.

Now that I’ve joined the church’s cell group I’ve also come to realise that the occasional touch of insanity is a natural part of conversations, in-jokes and life in general. I honestly still don’t know how we managed to talk about food, wearing glasses and whether a computer in the bathroom is really necessary throughout the last meal we had together. So it’s probably best not to ask.

Our most recent joke was mostly on me. As many of cell group’s comedy gold moments have been; there have been far too many for me to remember them all. The past few Sunday evenings have been spent studying Corinthians 1, the book that explores how relationships are supposed to work. As you may know, the topic of sex before/outside marriage can be tricky territory to have to explore, and so “sex” somehow ended up being replaced by “physical activity”. Had I not spoken up, the territory may have remained tricky; however, I’m not sure whether my input provided a bit of comic relief or only made it all the more awkward.

“I tend to think of physical activity as just keeping fit and active. Like going to the gym, or something.”

Not my most intellectual contribution to a group discussion. Fortunately, after a brief awkward pause, everyone present saw the funny side of it, myself included (eventually). Suffice it to say, we at cell group are now firm believers in waiting until after marriage before you go running, or work out on the treadmill to your hearts’ content.

Joking aside, I think one of the best things for me is the time we take to analyse the meaning behind much of what we read in the bible. I’ve found that regular church services, great though they can be, can get a little bit routine at times: turn up, play violin in Music Team, listen to reading, have someone comment on violin playing/ask after parents, go home and continue with day.

It’s sharing personal beliefs at a deeper level with friends and question anything that doesn’t make sense that helps me to understand the concept of faith. Being an overly analytical autistic introvert means that just thinking and believing what I’m expected to without reflecting on it doesn’t come naturally. This may be a strength, it may be a weakness, or, as is often the case, it may be me and my “special” brain, unable to understand things like a “normal” person. But hey, as our favourite cliché goes, “there is no such thing as normal”. How true.